Only Minutes of Life: QUESNELL Daughter — 1914

Those of us who’ve been avidly watching the British series “Call the Midwife” might believe that we know a lot about giving birth at home at a time and place when this was the common method. Despite some dire living conditions in the area of postwar London featured in the series, most of the babies are born alive and well, thanks to the skills of the professional midwives.

However, my most recent finding about my husband’s father’s family has raised questions about home births that didn’t have a happy outcome. A Death Record from the Cape Province of South Africa shows that my husband’s paternal grandmother gave birth to a baby girl on 21 Jan 1914. Sadly, the infant died of “congenital weakness” within “1/4 hour” of being born. She was given no name and was listed only as “Child of Joseph QUESNELL — Female.” 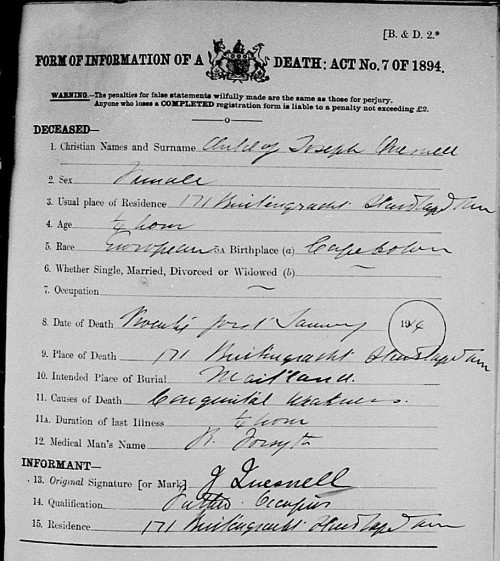 What was “congenital weakness?” It seems to have been a generic term for a number of conditions that modern medicine would probably be able to identify more precisely. The Birth Injury Guide website lists seven specific conditions, but concludes with a description of hypotonia, “a medical condition marked by weak and/or limp movements, and … often referred to as ‘floppy infant’ syndrome.” Two causes that might apply to this infant are genetic disorders and birth trauma or injury.

Regardless of the cause, there was probably nothing that could have been done for such an infant born at home in 1914. Even if the birth had taken place in a hospital and the child had survived, she might well have done so with serious disabilities at a time when there were few treatments for such defects.

It’s not clear whether Dr. Forsyth, named on the Death Record, was present for the birth or was called when it appeared there might be difficulties with the birth or after the baby had died. Since Alice had given birth several times before, she might have been attended by a midwife, at least in the early stages of labor.

For a family historian, other questions push to the fore.

Where were the other three children during the birth and its aftermath? Victor was 15 years old, Richard was eleven, and my husband’s father, Harold, was only seven. Did their father take them to be looked after by a neighbor or a relative once labor started? Or were they told to stay in their rooms until called to see their new sibling? The Death Notice doesn’t state the time of death; perhaps they were asleep during their mother’s labor.

Were there other births in the nearly eight years between the births of Harold and this infant? It seems likely although no records have yet been found for additional children. Alice WÜRGES was 32 or 33 in 1914 so she would have been in her prime child-bearing years before then. Given the spacing of two to three years between prior births, I would expect to find at least one other birth during this period.

Where is the infant buried? According to the Death Notice, she was to be buried in Maitland Cemetery, but she is not included on the common gravestone (see photo) with her brothers and her mother.

What effect might this death — and possibly those of other younger siblings — have had on Harold? I don’t recall my father-in-law ever talking about other siblings, even his older brothers, and always thought him to be an only child. Perhaps these early memories had faded by the time I met him. Perhaps such memories were too painful to be mentioned to a newcomer to the family. Then, too, certain topics were not addressed so openly by South Africans of his age and courtliness as they were by Americans of the time.

Alas, as too often happens, the chance for asking such questions evaporated years ago, leaving us with only our imaginings.

1) Ask researcher Anne Clarkson in Cape Town to obtain the burial cards for the QUESNELL family in Maitland Cemetery.

2) Ask my mother about the circumstances surrounding the home birth of her youngest sibling when she was nearly five years old.

This entry was posted in QUESNELL, WÜRGES and tagged cause of death, congenital weakness, Death Record, FamilySearch.org, Maitland Cemetery. Bookmark the permalink.

2 Responses to Only Minutes of Life: QUESNELL Daughter — 1914