My husband and his brothers spent a lot of time when they were young with their POOLE grandparents and speak of them with great fondness. Family members agree that Ouma POOLE’s given name was Letitia Selina. However, alternate names emerged during research into vital records.

The following records are reviewed in the order in which they were found online and in various repositories.

Ouma’s name is given as Lettie on her nine-year-old daughter Angela’s 1918 christening record. This use of a nickname is somewhat odd since her husband, Arthur Henry POOLE, and the other participants are all listed under their formal given names.

Her maiden name is listed as Letitia Selina MINNAAR on the birth certificate of one of her younger sons, Lionel Henry POOLE, born 24 Feb 1914.

A transcription of a 1908 baptism record from St. Mary’s Anglican Church in Potchefstroom indicates that her son Herbert Arthur POOLE was born 28 Jan 1908 and also gives her name as Letitia Selina. Since the family agreed that Herbert (Uncle Bert) was the oldest child, this record also helped to narrow the range of likely marriage dates for Arthur and Letitia to two or three years before his birth.

In 1907, marriage license #2781 was issued to A. H. POOLE and Aletta C. MINNAAR. Research showed that this was the only record for a couple with their surnames in Potchefstroom, Transvaal, between 1905 and 1907. Aletta was not a given name previously encountered for Letitia, but the nickname Lettie could have been used for either Aletta or Letitia. As discussed in a previous post, Letitia’s mother gave her name variously as Engela Aletta (Afrikaans) or Angela Letitia (English); it is likely that her daughter followed the same convention. However, such a conclusion required verification in other sources.

Probate records for Letitia’s parents confirmed that the given names of both Letitia Selina and Aletta C. referred to Ouma.

Letitia’s mother, Engela Aletta Jacobmina VAN DER HOFF, who had remarried after the death of Letitia’s father, died 17 Jun 1941. Her death notice lists living children from her first marriage. Included is A. S. POOLE, presumably the initials for Aletta Selina, another variation of Ouma’s given name, this time an Afrikaans/English amalgam of those on her children’s records and the one on her marriage license. 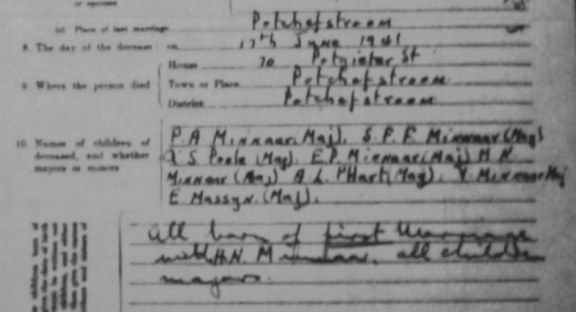 Letitia’s father, Hendrik Nicolaas MINNAAR, died 26 Jun 1903. His death notice filed the following year provides the earliest record yet found for his daughter. It lists all ten of his children, ostensibly in birth order and with their full names, and gives Letitia’s name as Aletta Celina.

From the evidence uncovered so far, it appears that Ouma’s parents, in keeping with the Afrikaner heritage of their families, named her Aletta Celina, a name which she continued to use until her marriage in 1907.

However, from at least the time of the birth of her oldest child in 1908, she seems to have used the English form of her name, Letitia Selina. We’ll probably never know her reasons for doing so. Having married a man from Wales, she might have wanted to make her given name congruent with her new Anglophone surname. Or perhaps the name change signaled her new status as wife and then mother. Given the use of Lettie, a somewhat homely-sounding nickname, on her daughter’s christening record, it’s doubtful that she would have considered Letitia a more romantic or euphonious name than Aletta.

Afrikaner tradition requires children to use polite forms of address for all adults, whether related or not, in both formal and informal situations. Perhaps for this reason, the Afrikaans honorifics seem to convey more respect than their English equivalents. Arthur and Letitia POOLE may have used English names, but their grandchildren always addressed them as Oupa and Ouma.

Once again I want to thank Agent Q, my husband’s brother in South Africa, for sending a copy of the portrait of Letitia Selina MINNAAR that hangs in his home. I have tentatively dated this photo to the period 1903 – 1907, when she was probably 18 to 22 years of age. Might she have been thinking of her husband-to-be as she gazed into the distance?

The indexes published online by both the National Archives of South Africa and Ancestor.co.za continue to be useful in identifying spouses and in finding probate records and women’s maiden names.

With all of the publicity about the release of the 1940 U. S. Federal Census on 2 Apr 2012 and the indexing currently being done by many thousands of volunteers, let’s not forget all of those unsung heroes who labored for years to transcribe records and upload them to various message boards. I’m especially grateful to Gary Cannon, whose e-mail address indicates he lives in New Zealand, for his transcription of the records for St. Mary’s Anglican Church in Potchefstroom as found on RootsWeb. Without his efforts, it would have taken much longer to locate the marriage index for Arthur and Letitia.

1) Show the photo of Letitia Selina to Maureen Taylor during a consultation on 5 Jun 2012 in conjunction with her appearance at the California Genealogical Society’s seminar the next day. Known as “The Photo Detective,” Maureen may be able to help me refine the date estimates by looking at Ouma’s clothing and hairstyle. [10 Jun 2012: Unfortunately, I was unable to attend this consultation. Mary Beth]